Join us for our Navy League Luncheon Meeting
at the Hereford House in Leawood, Kansas
Thursday, August 19, 2021, at 11:30 AM,

United States Marshal of the Western District of Missouri 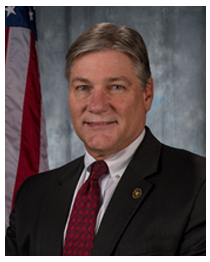 Mark S. James was appointed the 31st United States Marshal of the Western District of Missouri by President Donald J. Trump on March 12, 2018. Marshal James is a native Missourian. He obtained a B.S. in Criminal Justice and Administration from the University of Central Missouri in 1978. In 2001, he earned a Master of Science in Strategic Intelligence from the National Intelligence University. In 2008, he received a Doctor of Laws from the University of Central Missouri. He is a published author on the topics of Russian organized crime and domestic terrorist groups.

Marshal James began his law enforcement career as a Missouri State Trooper in 1978. He served as a trooper, undercover investigator, and intelligence supervisor until 1987. Marshal James received numerous commendations as a Missouri trooper to include bravery under fire.

In 1987, Marshal James became a Special Agent with the Bureau of Alcohol, Tobacco, Firearms and Explosives (ATF) in Kansas City. He went on to become the Resident Agent in Charge of the Omaha Field Office, the Chief of the Intelligence Division in ATF Headquarters, and ultimately the Special Agent in Charge of the Kansas City Field Division. As an ATF agent, he gained a reputation for working complex investigations on violent gangs, criminal organizations, and domestic terrorist groups. He was named “Co-Investigator of the Year” by the Federal Law Enforcement Officers Association for his work in solving the murder of a federal witness. He also implemented a statewide gang resistance education and training (GREAT) program in Nebraska public schools. His work in intelligence at ATF resulted in his being named an Intelligence Fellow by CIA Director George Tenet and awarded the ATF Supervisor of the Year by ATF Director John Magaw. In 2002, the Marshal was called back to Washington to serve as ATF Incident Commander in the successful manhunt for the “DC Snipers” for which he received the Director’s Commendation.

In 2009 after 31 years in law enforcement, Marshal James became the Vice Chancellor and then Chancellor of the Metropolitan Community College (MCC) of Kansas City in 2010. MCC is the fourth largest college in the State of Missouri serving 37,000 students on five campuses. Though retired from law enforcement, in 2010, Marshal James subdued and disarmed a knife-wielding attacker on campus for which he received the ATF Citizenship Award. After nearly nine years in higher education, Marshal James retired from MCC in July 2017.